A hearty thanks to all the bloggers who took a moment to answer the first roundtable question for the new season. As my duty for for hosting round one, I sifted through your responses and put together this highlight reel. Brian wanted the roundtable to focus on how to improve the blogpoll, and I think there's a good deal of input on that. Also, there's a lot of fun namecalling and Quantum Leap scenarios which, while less substantive, are very salacious and worthy of some airplay here. So here goes:

1. What's the biggest ripoff in this preseason poll? Either pick a team that's offensively over or underrated, or you can rag on a particular voter's bad pick (hey, we're all adults here, we can handle it). 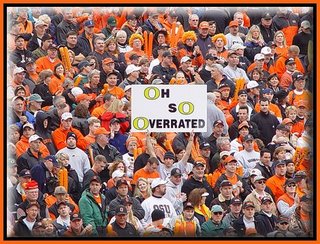 2. What shold a preseason poll measure? Specifically, should it be a predictor of end-of-season standing (meaning that a team's schedule should be taken into account when determining a ranking), or should it merely be a barometer of talent/hype/expectations?


3. What is your biggest stretch in your preseason ballot? That is to say, which team has the best chance of making you look like an idiot for overrating them?

4. What do you see as the biggest flaw in the polling system (both wire service and blogpolling)? Is polling an integral part of the great game of college football, or is it an outdated system that needs to be replaced? If you say the latter, enlighten us with your new plan.

5. You're Scott Bakula, and you have the opportunity to "Quantum Leap" back in time and change any single moment in your team's history. It can be a play on the field, a hiring decision, or your school's founders deciding to build the campus in Northern Indiana, of all godforsaken places. What do you do?

Thanks, fellas. Catch you next roundtable.