Blogjammin': fightinamish Returns From His Cloud Palace to Chat with mgoblog

Greetings, mortals. My non-divine friends have informed me it has been quite a number of your human months since this website has been updated, which came as a bit of a shock to me... you humans and your silly concept of "time". At any rate, I have dusted off the old keyboard, recovered the old password ("DemetriusJones4Heisman"? God damn, it has been a long time), and strapped on my blogger codpiece for this week's footed ball game in Ann Arbor.

Just behind Death, Taxes, and the fate of an unguarded plate of cocktail weenies in Mark Mangino's presence, the most robust certainty in my brief lifetime of blogging has been my annual chat with Brian Cook at mgoblog (you can also add "said chat devolving into discussions of sodomy, bestiality, and the dehumanizing practice of urinating on your fellow man" to that list, too). Even while on my celestial vacation, I just had to block out an evening to talk some chalk with such a sharp football mind, committed fan, and certified pervert of Brian's caliber.

(Into things like context? Read Part One at mgoblog first)

fightinamish: There's some high confidence in Notre Dame's experienced secondary. Does Michigan have anyone capable of rattling it (provided of course somebody is able to miraculously get the ball airborne downfield)?

Brian Cook: Michigan's just announced that two-touchdown receivin' WR Junior Hemingway is "questionable" for Saturday with an ankle sprain, so unless Darryl Stonum has an instant renaissance Michigan won't be going deep much, FWIW.

Big plays will have to come in the run game, which certainly seems a possibility given Tenuta's blitz insanity. That and five-yard losses.

What would you do if Michigan lined Brandon Graham up over Rudolph, by the way? Leave him in to block or slide back over or just risk it? Graham was pretty wicked in the opener, nearly sacking Tim Hiller four times.

It sounds like Graham is the cornerstone of the Michigan front, and it's going to be key for the Irish line to keep protection against the basic rush and force Michigan to blitz if they want pressure. I would make a note of where he is on every play and make damn sure there's some help on blocking him or a mix of playcalling that will neutralize his agressiveness.

For what it's worth, Rudolph is a pretty lousy blocker, so I'd just as soon send him on a short route, since he'll probably be more useful against the rush downfield

I might just shove him in the slot and rely on backs to help out on Graham.

I'm sure you would shove him in the slot. But Kyle don't swing that way

Hey, what are you guys talking about?

Uh... to change the subject slightly, Craig Roh's effectiveness against an actual team will be key. Also, Michigan got some pretty good interior pass rush from Mike Martin and Ryan Van Bergen.

Again, against a MAC team.

I take it that's the plan, then... to try and get pressure on Clausen with the defensive line so you can commit the defense to downfield coverage?

That's what I would do. ND's offensive line has been shaky in the past and the front four got a lot of pressure against Western. Martin really is a spectacular interior pass rusher. I think you play man on the corners with a cover two behind it and rely on the DL to get to Clausen. If that doesn't work, then you can start playing with fire by getting aggressive. ND loves that screen/draw game. 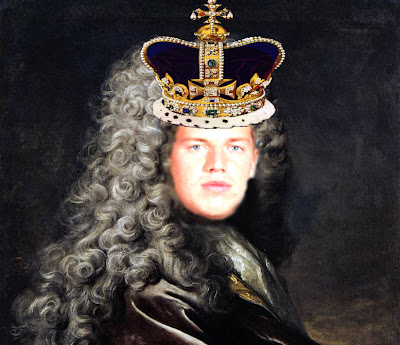 Indeed you are. Provided neither team completely implodes, this could come down to special teams play. I'm just going to take a look at Michigan's box score from last week and see how ever- SWEET LLAMA OF FRENCH GUYANA ZOLTAN KICKED A 66 YARD PUNT!!!!!!

It bounced and got like an 18 yard roll. But yeah, dude is from space. And... get this... you're never going to believe this... no... seriously... Michigan caught all its punts. Name one other school that did that in week one.

Ooooh... Happy learned how to putt.

Now we cannot be stopped.

Moises Alou used to urinate on his hands every day to make them tough and calloused so he could hit without batting gloves. Would I be correct in assuming that Michigan has been soaking their arms in urine ever since last year's ND game?

I'm sure Rodriguez made them as part of his devious master plan to have his football players play football.

Maybe that's what he did during all that extra practice time: Pee-kakke!

That would explain a lot.

Oof, I'm going to need some mind bleach for that visual.

How's the Notre Dame punter, by the way? Punt-tastic?

Maust was pretty solid last year. He didn't get too much of a workout last week, but he had a good average and, incredibly, 0 return yards on 3 punts. So, yes, the tradition of "screaming legion of sociopathic punt gunners from hell" continues here at ND.

Be forewarned. An extra spritz of pee-pee on your returner's hands would certainly be in order.

We also have a new kicker. That should be exciting. He's a true freshman who beat out two scholarship upperclassmen for the job. God knows the field goal game couldn't get worse from last year, but the prospect of competent kicking makes me tingly.

You could return punts maybe.

Well, let's wait until he actually makes a field goal. Once that happens, though, I'll be so sodden I'll be able to chop down trees with my bare hand.

Well, we've had our punter discussion. This means it's time for predictions.

I predict that Lou Holtz will drink a quart of whiskey and challenge Mark May to a swordfight.

I think you mean "thordfight."

He's mighty swift with a thabre.

But yeah, the game... I think Notre Dame has the better team this year. I have no doubt that Michigan's a much improved team from last year, but take it from somebody who has been there before, it takes a while to was the stink of a 3-9 season off.

Controlling for variables such as spontaneous human combustion by either team, I think it will be a close one that the Irish eventually pull away with in the late goings. I'd say a late Irish touchdown makes it a 10 point game.

This game is super hard to read because it looks like it'll come down to the precise trajectory of three deep balls and three linebackers on blitzes that will either intersect with Brandon Minor or not, and could go either way. As the week wears on I'm leaning towards the lines, where Michigan's OL should be stalemate+ against Notre Dame's DL--I am not an Ian Williams believer--and Michigan's DL a stalemate+ against Notre Dame's OL. I have predicted Notre Dame wins this week twice but um, maybe Michigan by 3?

(I have zero faith in that.)

Yeah, I agree with that analysis. It's going to come down a few key plays. One slipped DB or ill-aimed blitz will crack this game wide open.

One, two, Hammy's coming for you.
Three, four, better lock your door.

As always. May you die horribly in a fire.