Abandon Perspective, All Ye Who Enter

When crazy rumors start flying around about a "major high school prospect making some type of announcement" at the College Football Hall of Fame a few hours before the Blue-Gold game, you spring to attention, particularly when the uber-recruit and ultra-hyped phenom child prodigy Jimmy Clausen is on campus. Suffice to say, the morning's plans changed drastically with this new knowledge. Rather than roll out of bed and make the trek from Chicago to South Bend a few hours before the game, we now had to leave under the cover of darkness to arrive bright-eyed and bushy-tailed at 8:30 AM (after losing an hour in time change) to witness something potentially monumental.

The crew cheerfully obliged, and in the lazy wee hours of the morning, we embarked on the Hall of Fame, lukewarm cups of McDonalds coffee in hand. Outside of the HOF, a makeshift podium had been set up, although the lack of any media led us to believe perhaps it was a decoy. 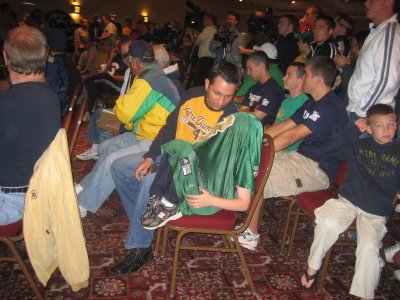 Using our sharpened amateur sleuthing skills, we overheard from some pen-and-notepad media types that the press conference was setting up in the upper press room inside. In the pressroom, a few dozen fans and media-types shuffled around anxiously, and I happened upon Jay from BGS, who had also been dispatched in the spirit of amateur journalism, coupled with the morbid curiosity and rabid fandom that also dragged us out of bed at the crack of dawn. As 8:30 came and went, an uneasiness settled over the crowd. A youngster of nine or ten, overcome by boredom and fatigue from the early-morning rousing, buried himself in his green #3 jersey to catch some quick Z's. It was a heartwarming image of the imprinting phase of the lifelong commitment to fanhood. Today's events would undoubtedly be an indelliable memory in the lad's Notre Dame fanhood, and a little lost sleep seemed like a small price to pay.

As 9 AM creeped closer, anxiety increased among the crowd. What was the cause of the delay? Some of the more entertaining hypotheses that were whispered included: 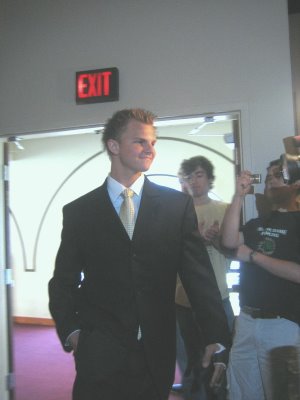 Things got even more touch-and-go when the audio mixer shorted out, leaving the microphone on the podium a mute and useless decoration. After, we presume, a team of frenzied staffers from the HOF raced to the nearest Guitar Center and fixed the rig, the PA system roared to life to the dulcet sounds of a roadie's "Check One, Check Two". The crowd, which had swollen to a near-capacity standing room only during the delay, erupted into jubilant applause. Shortly thereafter, Clausen and his entourage gingerly entered the room, to thundrous applause.

Clausen gave a brief introduction, then announced his intention to play for the University of Notre Dame. Many people captured video of his speech, which you can find here (courtesy of Michael S., via Blue-Gray Sky), or here (Mike Frank's footage from Irish Eyes). We took our own footage of Clausen, but the audio is a bit substandard and the camerawork is a little shaky (hey, I hadn't had any alcohol yet that morning, you know how it goes). Some of the highlights worth mentioning are: 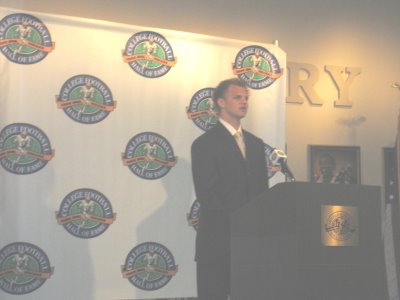 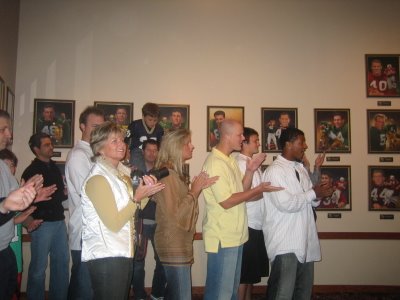 Also on hand was the entire Clausen clan, along with Clausen's teammate Marc Tyler, a prized running back recruit also being pursued by Notre Dame. A few times, Clausen mentioned Tyler, and the crowd jokingly tried to goad Tyler into going up on stage and announcing his commitment as well. Big brothers Rick and Casey, both former Tennessee quarterbacks, seemed proud and supportive.

Clausen wrapped up his speech and made his exit, immediately swarmed by adoring autograph- and photo op-seekers, including, admittedly, myself. He graciously signed some autographs, including one for the sleepy youngster in the photograph, on a piece of paper from my notebook I had supplied his embarrassed and unprepared father with.

Okay, so I know I'm a grown man talking about a high school junior, and we can go on and on about perspective, unrealistic expectations, the sickening overproduction that goes into recruitment, and Ron Powlus' two Heismans, but we're all thoroughly aware of all those things. More important than any of that was the indication of Notre Dame's status. For nearly a decade, Notre Dame has floundered under mediocre coaches who saw it more fit to make excuses and lower expectations, while all the while we, as fans, knew what the program was capable of. As Jay noted, even mediocre coaches have been able to have a few great seasons by virtue of being at Notre Dame. And now, with a compotent coach that personally attracts top-flight talent, the college football world should be put on alert. 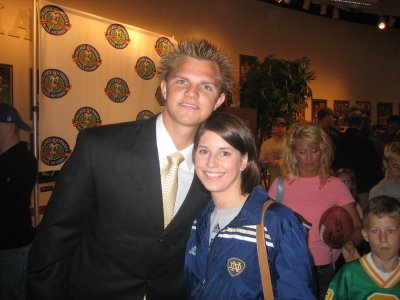