Just some snaps we took at the game. We won't get too heavy on analysis, since the competition wasn't terribly fierce and you can drive yourself crazy reading too much into a scrimmage. Click the pictures for full-size. 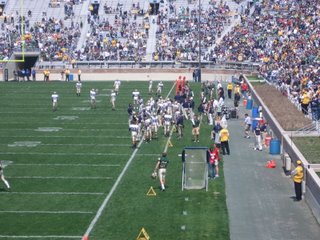 Quarterbacks: Brady was Brady. He looked confident slinging the ball around, hit his targets on a few long balls, and kept drives going with underneath routes to the tailback, presumably testing the side-to-side capabilities of a relatively green set of linebackers on the Gold defense. He's good, don't worry. Evan Sharpley looked very solid on the second team, hitting his routes with precision and showing some great pocket presence, occasionally tucking the ball and running. For the first time in several years, I feel like we have some quality talent at backup should the unmentionably horrible happen to Quinn. 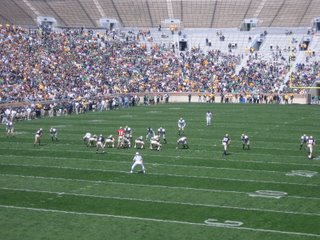 O-Line: A very visual example of Willingham's failure in recruiting was the fact that we couldn't field two teams of O-lineman for the scrimmate. Instead, the linemen played both ways, wearing green jerseys and further confusing the colorful smorgasbord of jerseys out on the field. With John Sullivan still on the mend, the lines rotated around to fill the vacant spots, and, disappointingly, nobody stepped up and made a clear case for owning the job. Several times there was big pressure from the right side of the field, which I secretly hope is more indicative of the power and speed increases for the talent on the D-line. The right tackle spot is still up for grabs, and it will be interesting to see if Sam Young can make a late campaign for it when he steps foot on campus in the fall. More likely is that Duncan or Turkovich will develop into the role. Hopefully Quinn's ability to step up in the pocket and evade pressure, coupled with sure-handed receiving, can alleviate some of the pressure on the inexperienced right side. 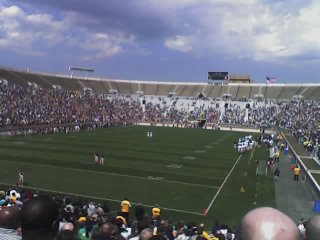 Tailbacks, Receivers, Tight Ends: Darius Walker had a so-so outing, but the makeshift O-line wasn't helping him out with solid schematic blocking. Travis Thomas wowed the crowd with an 85-yard scamper and showed a surprising second gear as he blazed passed our supposedly-speedy secondary en route to the end zone. Early entry freshman George West ran with the first team, and looked like a valuable asset for a corps that is looking to replace the small, shifty Matt Shelton. Rhema McKnight is back at full-speed, and I'm excited to see him have the big year that a knee injury deprived him of last season. Samardzija was his usual self, using his size and quickness to get behind the defense and haul in a superb fade for a touchdown, a play I presume we will be seeing plenty of in the fall. The tight-ends made their catches and showed good use of their large frames by getting open in the short zones, although I didn't see the gamebreaking potential that Fasano consistently displayed. James Aldridge was banged up and didn't see any playing time, so we'll just have to wait patiently to see what he can contribute. 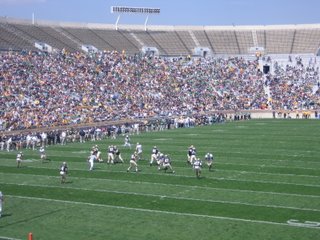 D-Line: The die-hard optimist in me is predicting a breakthrough season for this group. Going four across with highly-touted and talented linemen, there seems to be no reason why this can't develop into a dominant force. The ends looked quick and powerful, tracking down running backs and making some big plays, while the middle was anchored very well. There was a lot of pressure on the QB's, but that was also caused by a fairly inexperienced O-line that played 60 minutes. I liked what I saw, and hopefully this will be an impressive unit come fall. 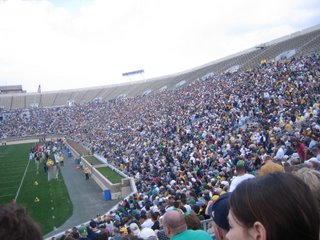 Linebackers: A lot of personell was shuffled around throughout the game in an effort to see who will step up to take the open jobs. It looks like the idea is speed, speed, speed, as the real standouts were the rangy athletes rather than hard-hitting brutes. While we'll have a new-look crop of LB's next season, it's still up for debate whether this will result in an improvement. At this point, a lot of the burden is on Rick Minter's shoulders to put together a defense that can utilize the talents available while limiting our susceptability to our weaknesses. 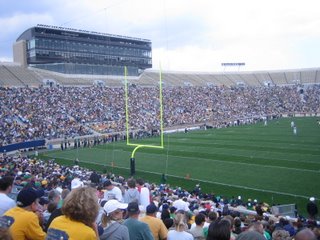 Secondary: Another unit with some speed and talent that looked a bit disoriented. The first team held their coverage adequately, but my biggest disappointment was the inability for any of our so-called speed demons to run down Travis Thomas on his long touchdown rumble, even though it looks like several of them had a good angle to make the play. Again, Minter's got his work cut out for him, turning some patchwork talent into a strong unit that can overcome the physical deficiencies they will be facing during the season.

Well, there y'go. Just some quick surface observations from a fan in the stands.