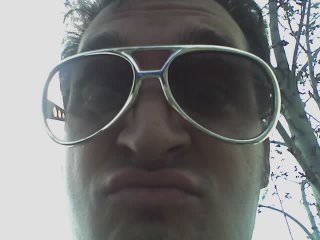 The Spring Game is typically a rather subuded affair, mostly punctuated by students slugging down boxed wine in a parking lot while being assaulted by sheets of freezing-cold rain. Anyone who has lived in the midwest, particularly in the frigid lake-effect climate zone surrounding South Bend, understands that the term "spring", when used in April, is a highly relative and mostly ironic appellation. Couple the touch-and-go weather with a decade's worth of wilted expectations, and the entire weekend goes fairly robotically. The souls brave enough to trek out to northwest Indiana dispassionately dispose of cases of alcohol and wander into the stadium around the third quarter, hoping against hope that the team had grown several inches and shaved a second off their 40 times during the winter months. 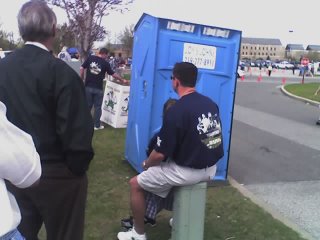 The feeling in the parking lot was something altogether different. For one, an unprecedented crowd had arrived, 41,000 strong in attendance at the game. Additionally, there was the afterglow of Jimmy Clausen's unexpected press conference, which ignited a giddy sense of optimism in the ND faithful.

Judging by the preparation of the tailgating area, it seems like Notre Dame's administration was also taken by surprise. The great disparity of outdoor toilets to the number of fans that arrived indicated that they were expecting a crowd more comparable to the Willingham years. As a result, each trip to recycle beer became a heart-stopping experience, as long lines of fans a dozen deep hopped anxiously on their toes, pitting their intestinal fortitude against the torturously slow-moving clock.

"Two shitters in the whole fucking parking lot, and they put both of them right behind our tailgate," a cheerful yet irked fan remarks. Despite his unfortunate circumstance of having the entire parking lot's hub for micturition unceremoniously dumped in his lap, he is affable and hospitable to the large crowd of uninvited company anxiously crossing their legs and waiting their turn for sweet release. 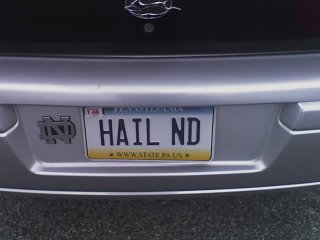 Lacking the relevant facts and figures to back it up, I will not go so far as to say that Notre Dame is most prevalent theme nationwide for personalized license plates, but a quick survey of the parking lot indicates a strong anecdotal argument for this claim. This is also evidenced by the fact that many of the plates say "IRISH", followed by an incomprehensible string of numbers. One gentleman from Illinois proudly proclaimed himself to be the 127th person to affix the phrase "Irish" onto his car - "IRISH126". Texas, Illinois, Pennsylvania, and California plates all abound with seven-letter declarations of allegiance. Those too lazy or cheap to battle the local DMV for the coveted "Irish plus next integer" plate showed their support with officially-licensed plate holders, adhesive chrome monograms, and, for the truly cheap, stickers.

A recent addition to the festivities (or perhaps one I had been too drunk in previous years to notice) was a large "family section": an enclosed area where youngsters could run around in a safe, alcohol-free environment. In the spirit of journalism, I emptied the freshly-opened beer in my hand (into my stomach, of course) and chucked it gingerly into one of the elusive, difficult-to-find Willingham-era trash recepticles. 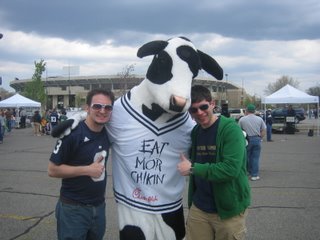 The biggest attraction was the Chick-fil-a cows, who graciously posed for a photograph with some adoring fans. The supply of free sandwiches had long since been exhausted to the ravenous early-birds who had the gastronomic voracity required to consume fried chicken patties coated in layers of carmelized sugar at sunrise.

Suffice to say, there was an abundance of high-energy, perpetually underfoot youths tossing miniaturized footballs about, basking in the unseasonably polite weather and participating in the lifelong indoctrination process of perpetual fanhood for which their parents should be heartily commended. The occasional spilled beer from adults attempting heroic diving grabs on errantly tumbling overthrows is a small price to pay for the saccharine sound of children's laughter that enriched the tapestry of sights, smells, and sounds of the college football tailgating experience. As the shakes from several alcohol-free minutes began to overtake me, I decided to make an exit from the family area and move my patrol into the heart of the pregame festivities. 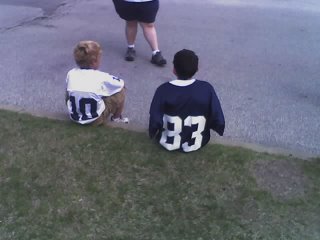 A freakishly miniaturized Brady Quinn and Jeff Samardzija draw up some plays in the dirt. 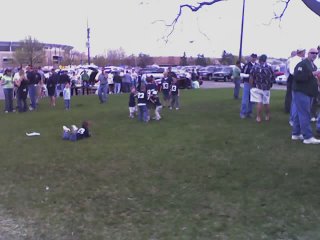 After replenishing my vacant hands with fresh brew dogs, I was magnetically drawn to a particulary rowdy tailgate under a proudly-displayed Polish flag. Just underneath the bicolor was a flag with the number 83 on it, leading me to suspect this might be the family of acclaimed receiver Jeff Samardzija. My suspicions were all but confirmed when I found a rowdy pack of children playing a touch football game, every last one of them wearing an 83 jersey. I cautiously introduced myself to what turned out to be Samardzija's uncle, who graciously supplied me with a beer and pointed out Jeff's parents, who where were engaged in an animated conversation with some friends. Also on hand were members of the Zbikowski family, a monumental marriage of two eastern-bloc clans whose last names totalled a mind-blowing 19 letters, 12 of which are consonants.

I hastily retreated Little Warsaw and returned to my own tailgate, where we made quick work of a trunkfull of iced beers under the shimmering lapis lazuli of a beautiful midwestern afternoon. The soothing sounds of Journey's greatest hits reverberated in through the parking lot, blasting from a makeshift stereo rig somehow attached to a late-model jeep, a MacGyverian feat of engineering deftly pulled off by a group of guys too drunk to tie their own shoes at the moment.

Suddenly, and quite unceremoniously, the parking lot deflates as the stadium fills up for the opening kickoff. We bid adieu to our concrete paradise and prepare ourselves for our next several hours in a world that prohibits alcohol, has adequate toilets, and is completely devoid of Journey's greatest hits. We are frightened, but we soldier on. 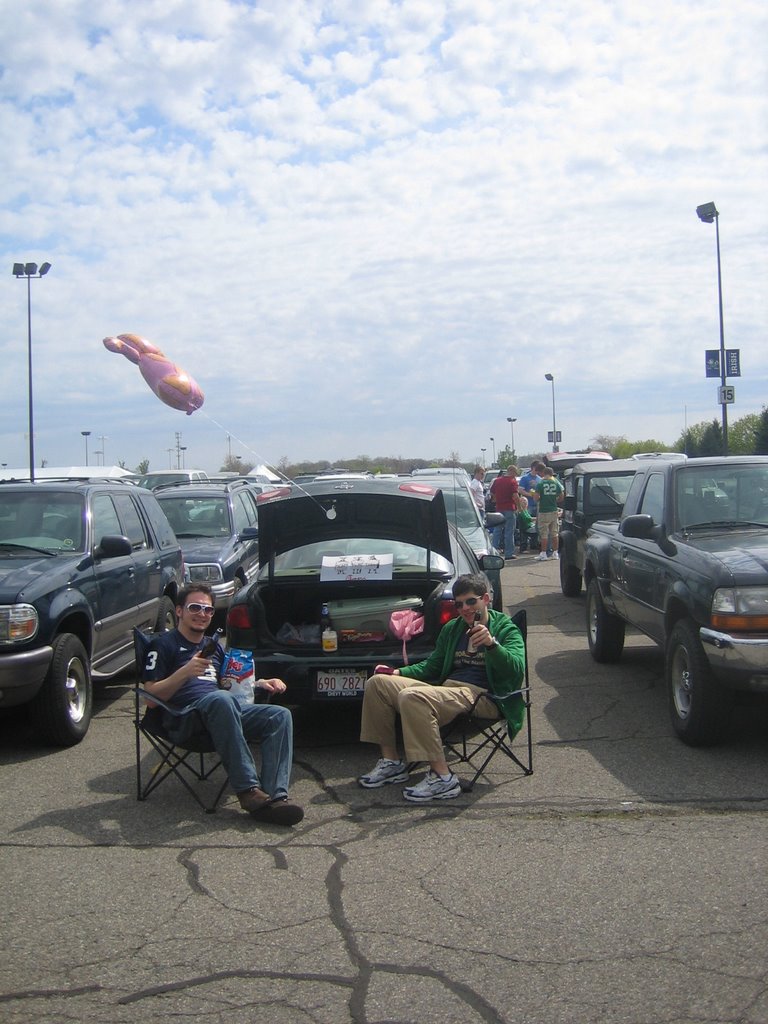