The House Rock Built's somewhat regular feature The Official Shirt Safari continues, this time eschewing pointing the finger at other schools' atrocious shirts in favor of pointing the thumb of judgment back at ourselves. Even the mighthy Notre Dame marketing department is not above ripping off an abomination against nature to try to make a few bucks, and this year's Gameday T-Shirts that just rolled out are no exception. I invite you to peruse these insipid and oft-unintelligible shirts, but the crux of this inquiry will be focused on the Michigan t-shirt, which reaches an unprecedented level of absurdity: 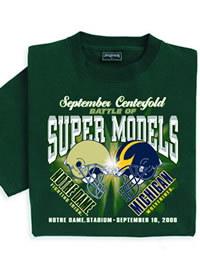 When Supermodels fight, who wins? The American viewing public.

Supermodels? Centerfolds? Can somebody help me out with what the meaning of this could be? As far as I remember, supermodels play no part in college football, which is played by oversized (and, um, perhaps sometimes dashingly handsome) men. I feel like this shirt might be a liability, as it could create unrealistic expectations for somebody who did not know what to expect from a college football game. Hopeful viewers expecting a supermodel catfight will be severely disappointed if Charlie Weis and Lloyd Carr break out into a Meatnormous Deathmatch at midfield. The results would look a lot less like this: 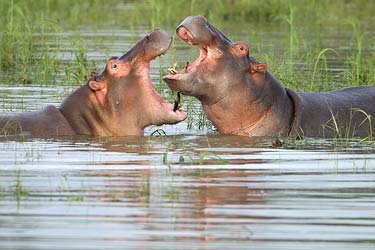 As a matter of fact, that inspires me to make my own Gameday T-shirt. I think this little design does a better job of summing up the rivalry and also gets that bloodlust going to psyche you up for one of the biggest games of the year. What do you think? 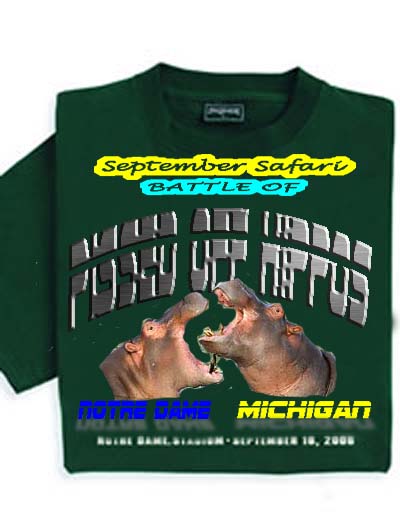