Howdy, blogpollers! I know I have met/linked/run afoul of many of you, but for those I haven't, I'd like to extend a greeting from Notre Dame's most schizophrenic second-most schizophrenic blog on the internet* (sorry, Marco, forgot about you at first). My name is Brian, and I have been endowed with the dubious task of hosting the first blogpoll Roundtable by another chap named Brian, who runs the whole shebang over at mgoblog. The topic is polling, and how to improve it. Here are your questions and, I suppose in true schizophrenic fashion, my interview with myself.

Since it's the first roundtable, I've just tossed up a couple of easy questions. Nothing too hard-hitting, so you can leave that red practice jersey on when you fill it out. Just remember to drop me a link in the comments when you've completed the roundtable and posted it on your blog, as I have the task of wading through everyone's responses and picking out some gems for my "wrapup" post on the topic. Good luck and good blogging!

1. What's the biggest ripoff in this preseason poll? Either pick a team that's offensively over or underrated, or you can rag on a particular voter's bad pick (hey, we're all adults here, we can handle it).

Personally, I think that all of these people who voted Arkansas high in the poll (two people put them as high as 13!) are suckers that fell for a big joke that Phil Steele has played on the world. All of you overeducated dorks who bought and have ingested every word of Phil Steele's 2006 college football guide (hey, I'm guilty too) saw that Steele put the Hogs at #13 in his preseason poll, which I am convinced is either a typo or a prank to see how many bloggers he can fool.**

Oh, and Jeff at RR putting the Yellowjackets #7 (4 spots ahead of the Irish, no less!) cracks me up. I'm going to give him a chance to defend his position before I give him too much hell, but, yeah, I'll have what he's having.

2. What shold a preseason poll measure? Specifically, should it be a predictor of end-of-season standing (meaning that a team's schedule should be taken into account when determining a ranking), or should it merely be a barometer of talent/hype/expectations?

One of my major problems with polling (and not just in the preseason) is that there's no clear rules about what is supposed to be measured. I like how Brian has at least made an effort to put forward rules that schedules should not be taken into account, but, realistically, it seems like every individual voter goes by their own agenda. There was a similar experiment on NDNation last year to put together a poll, and one voter, I believe his handle was "The Tom", ranked all the teams with 0 losses in order of strength, then all the teams with one loss, then all the teams with two losses, etc. As a result, his wacky results skewed the entire poll. At midseason, a couple of overperforming mid-major teams were in the top ten, while two-loss Ohio State wallowed near the bottom half of the poll despite, you know, every logical argument in the world indicating otherwise. Looking at some coaches' ballots (like, for example, some guy named Spurrier), it's pretty clear that they're working on their own set of rules to the detriment of the integrity of the overall poll. 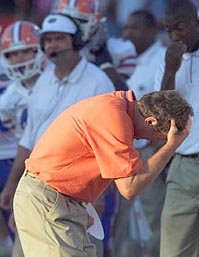 Rebel living by your own rules? Tell your story walking.

The way I see it, your ranking should be a measure of where you stand right here and right now, based solely on your accomplishments in the field. It perplexes me when a team falls in the polls in the middle of the season when word comes out that a player is injured, or when a team gets a bump in the ranking because they have three upcoming games against pathetic competition.

3. What is your biggest stretch in your preseason ballot? That is to say, which team has the best chance of making you look like an idiot for overrating them?

I played things pretty conservatively in my ballot, but I get the feeling that my pick of Auburn at #1 was less of an honest assessment of their abilities and more of what SMQ calls "a wack No. 1 pick an unfamiliar Midwesterner might fall for". Inexperienced receivers, losses at the meaty lineman positions, and an uncertain resoltuion to the visible weaknesses that Wisconsin and Georgia Tech were able to capitalize on last year all mean that Auburn could leave me with some blogpoll egg on my face pretty quickly.

4. What do you see as the biggest flaw in the polling system (both wire service and blogpolling)? Is polling an integral part of the great game of college football, or is it an outdated system that needs to be replaced? If you say the latter, enlighten us with your new plan. 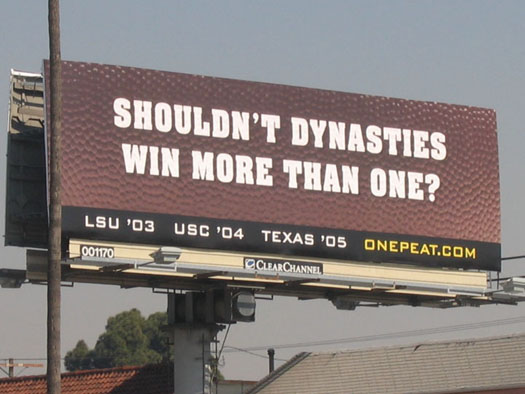 The polls are an unreliable, antiquated, and, to be honest, inherently unfair system. That being said, I love them. It's part of what makes college football so great: a limitless supply of things to bicker and brag about. As it is so richly intertwined with the history of football, I would never advocate getting rid of them, and fully embrace them as an imperfect oddity of the sport. One recent addition that I dislike is the BCS poll utilizing a system of strange and twisted computer polls. As biased and evil as human voters are, I think that computers are even more flawed and biased in ranking the power of teams, plus they cannot be held accountable for their results the same way a human being can. The computer geeks cost college football a consensus champion in 2003, when USC, ranked #1 in both human polls, was shut out of the title game due to the inverse square of the aggregate loss percentage of their opponents' opponents or some damn thing like that. As a result, we have had to deal with petty bickering ever since. Rather than curing polling controversies, computers have only made things even more messy and controversial. I say get rid of them and let us deal with this headache the same way we always have.

...and one optional bonus question, not related to blogpolls at all...

5. You're Scott Bakula, and you have the opportunity to "Quantum Leap" back in time and change any single moment in your team's history. It can be a play on the field, a hiring decision, or your school's founders deciding to build the campus in Northern Indiana, of all godforsaken places. What do you do?

One of the very first posts I made on this blog was a thought experiment on this very subject. You can see my answers here (hmmm, might have to fix those broken image tags). I would be interested to hear what other moments stick in the craw of other teams' fans.

* This claim has not been evaluated by any licensed authority
** Uh, since I've gone on record saying that, I suppose I should take some accountability. I propose that if the Hogs end up ranked 13 or higher at the end of the season, I will post a picture of myself painted red wearing nothing but Razorbacks boxers.