When Will Santonio Holmes Strike Next?

Santonio Holmes, the former Ohio State receiver last seen torching the Irish secondary in the Fiesta Bowl, has potted goal number two en route to his hat trick of infamy, racking up his second arreest in the still-young month of June, this time on several charges stemming from an incident of domestic violence.

The alleged victim identifies herself as Holmes' (let me make sure I'm saying this correctly) baby mama, the mother of Santonio's 18-week old daughter, according to the article. The article goes on to say:

Before the draft, Holmes said he was hopeful that he would go high in the draft so he could support his three children.

Ahem, that is to say he is the father of three children by (as further research reveals) three different mothers. As a twenty-three year-old with a fairly reckless past yet hardly any illegitimate children that I know of, I say that's pretty impressive. Anyway, Johnny Appleseed's attorney attests that it's a bum rap that he is sure to beat, so we wish him the best of luck at that. Rest assured, though, if Holmes picks up his third arrest this month, I will be chucking my slightly-disgusting hat onto the ice in celebration, which happens to be a Key West Fishing Hat. Currently, Vegas is putting even odds on the hat trick coming in a Cleveland public library.

The real tragedy, however, is the effect this will have on the Holmes family. We found this picture in the archives of Santonio and his adoring family, during much happier times: 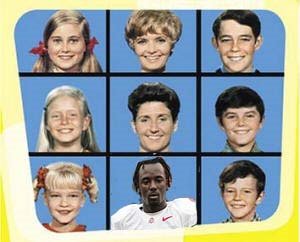 Think about the children. Vote "not guilty"

UPDATE: Ha! As was to be expected, MZone is light-years ahead of me on this one. That screen capture from the local news is classic. Those Wolverines certainly do not spare any effort in jumping on the Buckeyes any (fairly frequent) chance they get.