Dink & Dunk: Game of the Century (Stifle Your Laughter) Edition 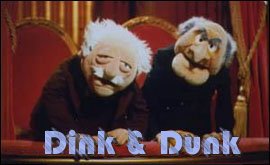 Wink Dinkins and Buck Dunkowitz couldn't do their normal Wednesday featurette because they were in prison. But thanks to the House's chief consiglieri and illegal searches being inadmissible, they're back in action. This week they take on last night's West Virginia-Louisville game.

And... it's over. An epic matchup of two teams who will both be ranked higher than Notre Dame come next week. Thanks for chiming in, fellas.
-amish

Labels: Dink and Dunk, Gratuitous Cheesecake, I Have The Worst F-ing Lawyers, Urban Meyer is a Weasely Bastard