On The Cutting Edge of Disaster

One of the founding principals of the House Rock Built is to closely monitor the ever-changing landscape of the commercial shaving industry, and to serve as a sane voice of reason in a mad world where the number of blades on our razors multiply on a nearly daily basis. When we hit five blades, we were right on top of it, and, God willing, we'll be there when they hit six.

Well, it's good to see that The Economist has taken up the fight against unbridled razor propigation with an in-depth study on the mathematical trends in blade inflation. Applying Moore's Law and setting up a conservative power curve, we're facing a 14-bladed razor sometime around the year 2100. However, if blades keep expanding at their present rate in a hypoerbolic curve, then we are truly looking at a worst-case scenario, with infinitely-bladed razors hitting the markets in just about nine years. Suffice to say, we may soon be confronted with the grave reality of zero-dimensional singularities on our razors, which would require the entire shaving public to rapidly learn the tricky and treacherous art of quantum shaving.

In fact, a friend of ours at Gillette has leaked this top-secret prototype drawing of an infinitely-bladed razor, which essentially features a ring of razorblades soldered onto a titanium Möbius strip. The future may be closer than we think. 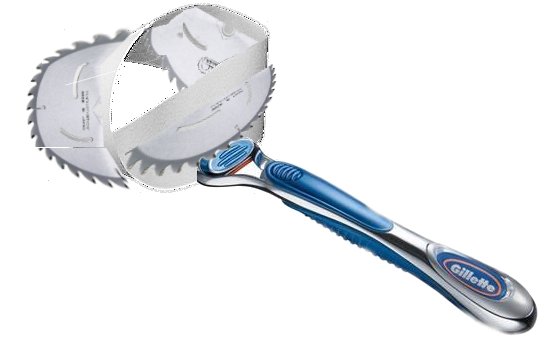