I have a very vivid memory of November 3, 2001, or perhaps more accurately, the week leading up to that Saturday. I was walking to an off-campus apartment just a tad east of Notre Dame's campus when, all of the sudden, I saw something unique and grippingly bizarre. Stretched out across a previously-vacant field of grass just off of the campus was a sprawling shanty-town of recreational vehicles. The inhabitants of this gypsy metropolis which had sprung up, unnoticed, in the middle of the night were engaged in what I could only describe as, in my naive Yankee vocabulary, a rootin'-tootin' hootenany. Throngs of grizzled and hunter orange-clad Southerners were slurping down beers and barbecuing at a frenzied pace, all while singing along to a rousing rendition of "Rocky Top" blasting from an unseen loudspeaker.

Now, believe me, I'm no stranger to tailgating, and it's certainly no surprise seeing large groups of rival fans on campus during the weekend of a big game, but this was something very different and puzzling to me.

It was Thursday afternoon.

Did they not realize that college football games typically occur on Saturdays in the fall?

Apparently, though, they did know what they were doing. What I was witnessing was an age-old tradition of week-long motor home tailgating, which has become a vital and indispensible element of the college football experience in the SEC. The game came and went, with a soon-to-be-fired Bob Davie predictably pissing away a respectably perfomance by the team, dropping ND's record to a dismal 3-5. As the strange visitors packed up and left, I reflected on their stay. While the campus was overwhelmed and overrun by Tennessee fans, they hardly were a nuisance. In fact, they were quite pleasant. Several times I found myself in possession of a completely unsolicited beer as I passed through a tailgate, and even though the team put forward a pretty dismal showing, the fans were very gracious and courteous in victory. I was nothing but pleased with my experience with SEC fans, and wondered why I, a lifelong college football fan and attendee, had never experienced an SEC tailgating invasion before.

The reason, it turns out, was that no SEC team had ever stepped foot in a state I was currently living in before. You see, schools from the Southeastern Conference make jaunts above the Mason-Dixon line about as often as a total solar eclipse. And that bugs me.

The lads at EDSBS got me thinking about this, as they wrote an impassioned plea to Florida's AD to schedule Notre Dame during a mutual open date in 2009. I love the idea, but I'm skeptical of the possibility. You see, the conventional wisdom for scheduling in the SEC is to load up on "body bag" games in the preseason (home games against overmatched colleges, who accept the big bucks and exposure from playing a big-name opponent and, in repayment, do not ask for a return game at their home stadium), then fight out their conference schedule (not a specific knock on Florida, though. The Gators do schedule tough non-conference opponents, it just so happens that these schools are in the same state). Road trips outside of the region are nearly unheard of, particularly ones to locations where the temperature might possibly dip below seventy degrees. If a few more marquee non-conference games are needed to bolster a schedule, the foes are constrained to in-state or in-region schools, or scheduled at a neutral site in the South.

When compared to Notre Dame, this type of scheduling flies in the face of the Rockne's Ramblers, Challenge-all-Takers maxim which led to the flourishing and widespread popularity the team enjoys today. As a lifelong ND fan following a team that consistently plays a national schedule, I find the hyper-regionalism of the SEC disappointing. Not only does it make it nearly impossible to judge the SEC's might in relation to the other major conferences (a problem I addressed earlier this season), but, more importantly, it deprives legions of fans of experiencing the great diversity that is college football. While the SEC's isolationist scheduling might be beneficial to the win-less records of their teams and apparent strength of the conference, it comes at the expense of not exposing the racous joy of a Southern football game to a large majority of the population of college football fans. Nothing but good can come from an increase in intersectional matchups, if for no other reason than to expose swaths of the heartland and west coast to the rumbling, whiskey-fueled stampede of pure sports mania that is an SEC tailgating RV convoy.

In summary, I'd like to echo Orson's sentiments and make my own impassioned plea to the conference to branch out and take on some teams from the North. Yeah, you might lose. Yeah, you might get frostbite and have to have several digits removed. Yeah, it'll require putting a little bit more gas in the RV. But think about all of the good it will do for the game just by taking a few risks. 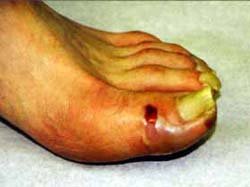 It's just a little frostbite, guy!