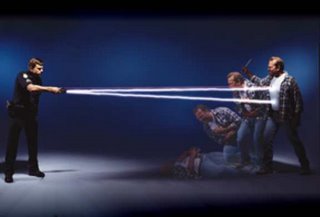 Boy, you know it's going to be a good day when the first thing you hear on the radio as you're driving into work is that Maurice Clarett is back in the headline-making business, after being arrested for, among other things, making an illegal U-turn, starting a high-speed police chase, resisting arrest after being tasered, and having a small arsenal of weapons in his vehicle. Oh, and the entire time he was inexplicably wearing a bulletproof vest, which rendered the stun guns ineffective (who knew?). Do yourself a favor and read that entire article, as it will really brighten your day with its sheer video game-esque absurdity.

Clarett, you will remember, is still waiting to stand trial on two counts of aggravated robbery, four counts of regular old robbery, and one count of carrying a concealed weapon from that ridiculous cell phone incident back in January.