The Meaningless Factoid on Google Game! 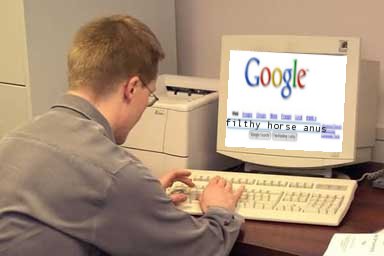 While my computer was busted and I was caught in blogger limbo, I missed a great deal of excitement and newsworthy shennanigans in the college football world. Sometimes, it was frustrating, like when big, scandalous, and easy-to-parody stories like the Rhett Bomar dismissal and the Ting brothers doping case news broke. Other times, however, I was relieved to be temporarily out of the blogging circuit. The best example was the ridiculously overblown assault on Jimmy Clausen and Notre Dame's integrity was carried out by the South Bend Tribune. While the Notre Dame crowd jumped into action on this one, I was more than happy to sit on my hands and not touch that drama with a ten foot pole.

I think the matter has been officially beaten to death, and I for one consider the case closed. For those of you still thirsting for more on this non-story, Brian at mgoblog has a good piece that pretty much slams the door shut on it, mercifully so. However, it has made for a fun little game that I feel like introducing to you now: The Meaningless Factoid on Google Game! So, in case you aren't fully up to speed, Jeff Carroll at the South Bend Tribune tried to formulate some kind of argument about something or other by the immutable evidence of... Google searches?

A Google search for the phrases "Notre Dame" and "Just like everyone else" finds 11,700 matches.
Another search, for "tarnished dome," returns 5,310 matches.

Oh, well, now that is persuasive. To be honest, I have no idea what he's driving at here, but I thought I'd pull a page from the Jeff Carroll book of journalism and try my hand at this game. Let's go!

There you have it. The numbers don't lie.