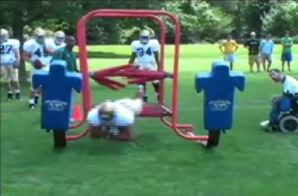 UND.com has, as I've mentioned before, created the ultimate drug for addicts looking for an offseason fix by uploading video highlights of every single preseason practice, as well as a Charlie Weis press conference. It's understandable if you don't have the time to race home and watch these clips, so I'll help you out with some synopses of this week's action.

If you're going to watch one video of practice, check out this one, which is a pretty quick cross-section of the activities from practice on Friday. My favorite moment comes at the 5:20 mark, when the running backs take turns running through some cruel mechanical device that looks like a giant spanking machine (pictured to your left). After laughing at the destructive power this machine has over the fittest and strongest college athletes, I did a little bit of research to figure out what the hell that thing is called. It turns out it is marketed under the name PowerBlast, so you can read all about it from the manufacturer's catalog. I'm thinking of setting this up in front of my friend's front door and then pulling the fire alarm in the middle of the night.

You can also see a gentleman in a wheelchair yelling out encouragement to the lads in the right side of the frame. Some folks at NDNation answered our inquiries about who he is and advised us that his name is Keith Penrod. He's a pretty fascinating character whose fanatical devotion to the Irish has earned him a lifetime pass to all practices and games from Charlie Weis, and even an honorary monogram. Now, I'm not a big one for cheesy human interest stories, but Penrod's story is an amazing example of the overpowering loyalty that makes Notre Dame fanhood so special.