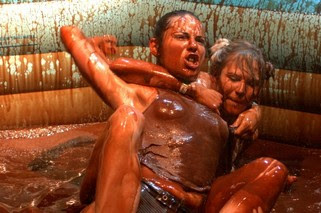 It's Michigan week, so you know what that means. It's time for me to don my traditional Mexican Wrestling mask and unitard and grapple with Brian Cook, the twisted puppet master at mgoblog. We try to be civil in our sparring matches, but once the ring gets filled with tapioca and the wrasslin' commences, it's kill or be killed out there.

Here's part one of our scintilating conversation, where we grapple with important topics like bratwurst made out of sex, world-destroying battles of übermensch punter-gods, the new Big 10 Morse Code Network, sushi on naked women, the sheer massivness of Ryan Mallett, and, occasionally, college football. Part two is over at mgo, here, so you can continue to soak up the madness over there. I'm gonna have a beer and a Vicodin, cause Cook eye-gouges and fishhooks like a crazy motherfucker. I'm in bold, he's in blue.

Fightinamish: You ready to tussle?

Brian Cook: Allright, I'm ready. I was finishing up my awesomely fun UFR for Oregon.

It was awesome. I felt like I was having an ice cream cone made out of sex and brautwurst.

In South Bend they call that a "Charlie Weis". It costs $1.19 at most convenience stores. Cheese is extra.

So should we start this thing?

Let's do it to it. So, right.  Watching the first half of the Oregon game, I kept thinking to myself that the entire Michigan team needs to, I don't know, see a therapist or something.  They look like a complete wreck psychologically.  Do you see the unraveling against Oregon as a direct effect of the loss the week before?

Well... insofar as the loss the week before indicated that our defense sucked, yes. Michigan has always had tons of trouble with spread option attacks until last year, Ohio State nonwithstanding, and that returned with a vengance for three simple reasons: our defensive line is bad, our linebackers are bad, and our secondary is bad. The rest of the implosion was bad luck (seriously: you put in a guy for one carry and he fumbles?) and Henne playing poorly. Oh, and our offensive coordinator being bad at life. 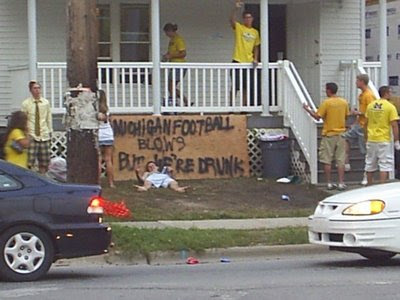 There's something to be said about healthy coping mechanisms.

So, more to the point, does Michigan actually suck or are they actually that top five team under some bizarre voodoo curse that will disappear once they drink the blood of a virgin... like a Catholic priest?

The defense actually sucks. The really sad thing about the Appalachian State game is that there was precious little trickery in their gameplan. They ran the same shotgun zone read handoff 21 times and gashed Michigan with it time and again. Against Oregon they were befuddled. The offense has a chance to be decent, though. They racked up a bunch of yards on both teams and only didn't score on Oregon because of a bunch of somewhat fluky turnovers and some cowardly offensive coordinating. The latter probably won't change but the former should. The offensive line has been pretty good so far, albeit against sketchy competition, and the run game has been good.

This matchup of Irish offense versus Michigan defense should be pretty hilarious.  What happens when the infinitely-resistable force meets the infinitely-movable object?

In this particular instance I think maybe the movable object? That offensive line seems to be the weakest unit amongst many, many weak units in this particular matchup, and one of the few moderately good performers the first couple weeks have  been Shawn Crable and Tim Jamison. Against a more conventional attack -- assuming Demetrius Jones doesn't make an appearance -- they should be more effective. Maybe. I hesitate to say anything positive about this Michigan team.

Except about Zoltan. Who is frickin' awesome.

And yet he is benevolent

If you bring him goulash, yes.

I'll be sure to prepare an offering.  He likes it served in the skull of his enemy, right?

Or upon the body of his newly acquired concubines. Like that sushi in Rising Sun.

Mmmm... fishy.  I say in the interest of saving both teams the humiliation of actually playing a game, we just have Geoff Price and Zoltan wrestle at midfield.  At the very least, it'll be letting the best players decide the game.

I would be up for that. At the very least we could get out of there in time to watch teams with, like, victories to their credit.

I take that back. Such an epic duel would probably take 77 years and 77 days.

And would probably destroy several surrounding villages. Millions would be homeless. 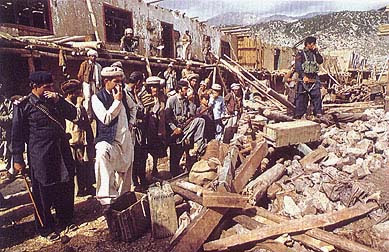 A village ten miles from the epicenter of the last Zoltan-Price fight that was completely leveled by the tremendous sonic boom.

And they would eat bears every once in a while

They've fought once before. Astronomers now refer to it as "The Big Bang".

We should totally set this up.

Severe danger of a punt knocking out a DirecTV satellite, though. And then what will the Big Ten Network do?

Given the way the Appalachian State game turned out, that would do huge business in Michigan.

So... anyway. Jimmy Clausen: best swing-passing quarterback ever? How did you evaluate his starting debut? I was obviously a little underwhelmed.

It's obviously hard to make any judgment when your quarterback is either getting his head bashed in, handing the ball off for a negative gain, or throwing a swing pass.  With the combination of a clown car of offensive linemen in front of him and a pee-wee football playbook, it's a little early to make any judgment, positive or negative, about the wonderkid.  Of course, that hasn't stopped Irish fans and bloggers from raving about his "poise" and "composure".  I think a lot of that is reading a bit too much into the tea leaves.

That being said, I liked what I saw when he let the ball loose downfield.  The long pass to Parris where he scrambled out of certain death and threw a strike across his body on the run was a glimpse at what it is that made everyone drool over this kid in high school.  He also gets bonus points for walking out of Beaver Stadium without urine stains on his pants.  If that's not "poise", you tell me what is. 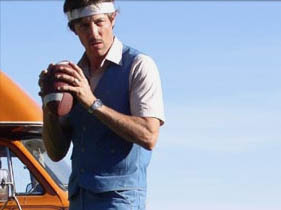 I don't want to make it seem like I'm writing the kid off, but I did think the whole poise thing was overrated. Several times he sat in the pocket until snowed under, taking an unnecessary -- but poised -- sack. Mallett, meanwhile, spent the second half of the Oregon game trying to friggin' kill his receivers by throwing it through their necks. Oh, and throwing balls 60 yards downfield. He was a little caffienated.

Only 60 yards?  That's a dump-off.  You're lucky he didn't throw it into Lake Huron

He looked a little pissed that the coaches were reining him in by not calling any of the routes that ended in Jackson.

He is big.  His legs are so long that he has two sets of knees.

That's not a helmet he's wearing... it's an aquarium with wings painted on it. 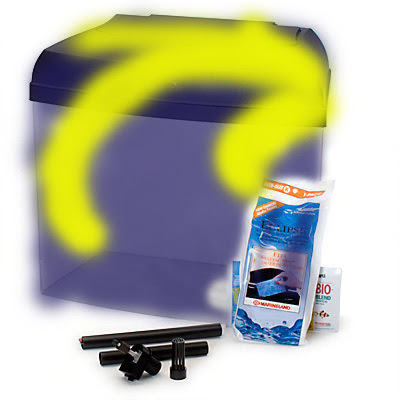 Ryan Mallett's customized helmet. Get it.. cause, like, he's got a big head and... nevermind.

Uh, he's big.  So big that it paralyzes the goofy metaphor region of my brain

Yeah, well, Clausen's so pointy he's, like, bad at football.

Anyway, aside from being big and having the ability to throw the ball into another time zone, do you see him turning into a real quarterback while he's spelling Henne or is he still a ways off from being anything but a sideshow freak?

Can I retract something? I called Clausen "the kid". This is obviously incorrect. He's older than Greg Oden.

Clausen, Oden, and Muddy Waters all shared an apartment in Biloxi back in 1931.

I read that somewhere.

Actually, it wasn't an apartment... it was a tent in a shantytown. It was the Great Depression, of course.

Re: Mallett. I don't know. I was initially unimpressed by his debut, but when I went  back and reviewed the tape it looked like he threw a lot of balls that were accurate but, as mentioned, were thrown a million miles an hour into his receivers necks and were therefore dropped. The interception was going to be between Manningham's numbers on a post but Manningham fell down and deflected it upwards. Several of his incompletions were ridiculous longballs into coverage that Michigan was just throwing because it was third and very long and those were safe throws. Michigan obviously coddled him, running a lot, but also let him throw a surprising amount of stuff in between the hashmarks. I think there's a potential for effectiveness on Saturday.

There is also a fairly high probability of a couple interceptions.

But by god they will be really *moving* when they're picked off.

Go ahead and intercept my "broken metatarsal special"... if you dare.

Wait, Google reveals I mean to say "metacarpal"... not that any of our readers would ever find that out.

No problem. Mallett throws it so hard that when it hits your hands it breaks your foot.

Whoo, doggy. That's some good stuff. You can read the thrilling conclusion here, if you dare.

Labels: Ann Arbor is a Whore, Behold My Mighty Photoshop Skills, Blogjammin', Can't We All Just Get Along?, Cut The Mullet, Haw Haw You're Illiterate, I For One Welcome Our New Space Emperor, Nauseating Injuries, Warning: Actual Honest-to-God Football Analysis