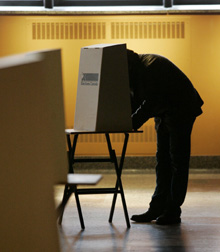 Brian over at mgoblog is geared up for the second season of the blogpoll a crazy and ambitious project to wrangle up the talents of the blogsphere and vote on the top 25 in football on a weekly basis. Year one of the project was a little bit shaky, largely because getting dozens of bloggers from around the world to abide by a strict deadline is a lot like herding cats. This year, however, the site's revamped, there's all sorts of crazy computer nerd coding and stuff, and there seems to be a good supply of dedicated and conscientious bloggers.

So here's what I will be doing with my ballot. The thing that frustrates me the most about your wire service polls is the cryptic nature of how rankings are attained and how severely teams are punished or rewarded on a weekly basis. What I'm striving for is to make the most transparent possible poll, with every step and judgment documented using a points system. Now, don't confuse this for some type of scientific or mathematical process, the points are completely arbitrary. However, they are quantifications of my judgments on a team's performance. It might not be the most accurate or fair poll, but I hope that it will have the clearest documentation of how the results were determined. Argument is welcomed and encouraged, as always.

Allright, so how do you make a preseason poll? How do you rank, for example, a dominant team that replaces nine starters on defense? Since I have no access to practices in Columbus, I really have no way of telling you how the defense is going to perform this year and therefore can hardly make an accurate judgment based solely on the merits of the team. Therefore, as much as it pains me, a lot of the preseason rankings are influenced by a little statistic I like to call Completely Irrelevant Velocity From Last Year's Performance (CIVFLYP). As you can see, this accounts for a very large portion of a team's final ranking, because honestly that's the best thing we have to go on at this point. I acknowledge that this reasoning is flawed (it's right there in the name of the stat), but it only will be factored into the preseason rankings. Over the course of the season, this error can be eliminated with subsequent re-evaluation.

So here's the process: every team starts with a baseline of 50 points, kind of like the points you get for writing your name on the SAT. After adding in CIVFLYP, I added or docked players on a range of categories I made up with values I came up with based on my rough judgments. Voila. Here's an introduction to the categories:

Completely Irrelevant Velocity From Last Year's Performance
WLBGB
Won Last Bowl Game Bonus
SAWO
Score At Will Offense
CDG
Casualty from Draft and Graduation
FSDD
Freaky Shut-Down Defense
VCC
Very Compotent Coach
SMFE
Show Me First Escrow
A little more complicated stat, these are points I'm purposely withholding from a team until I've taken a look at their performance. Like Mark May, I'm old school Missouri, I demand that you show-me before I give you props. If after a few games, I see that the team has it together, these points will be added into their score.
VQB
Veteran Quarterback
CFPB
Correction for Personal Bias