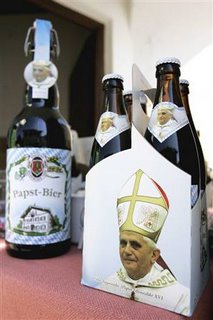 In a story far, far, far too perfect to be ignored by a respectable Notre Dame football blogger, a Bavarian brewery has just released a new, profoundly awesome pope-themed brew. Papst Beer, as it is called, is brewed in Mainz, Germany to commemorate Pope Benedict XIV's return to his hometown on a European tour.

This is an absolute must-have at any respectable Notre Dame tailgate. Beg, borrow, steal, and pay any amount of money to fly some of this out to South Bend. You will be a tailgating legend.