Blogjammin': The Boi From Troy

While it somewhat flies in the face of the spirit of Hate Week, I did keep up with my tradition of reaching out and chatting with an enemy blogger about the upcoming throwdown. Decked out in leather helmets and protective cups, the Boi From Troy and I had a civil chat about the game and used the opportunity to answer some burning questions about our rivals.

And then to fulfill our obligations as enemy fans during Hate Week, we both dressed up like pirates and had a heated slap fight. 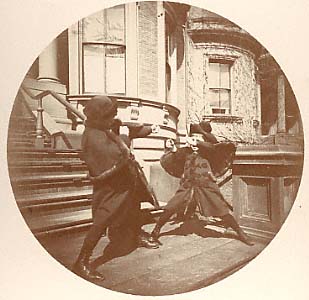 I do it for the fans.

Anyway, you can read the other half here (link pending), and here's my interview with BFT:

Solid answers from BFT. You may now resume your regularly-scheduled hate.

Labels: Behold My Mighty Photoshop Skills, Blogjammin', I Have The Worst F-ing Lawyers, Let The Hate Flow Through You, Mouth-Breathing Fans of Rival Schools, Movies I Love, Nauseating Injuries, Southern Cal Can Eat a Fat One