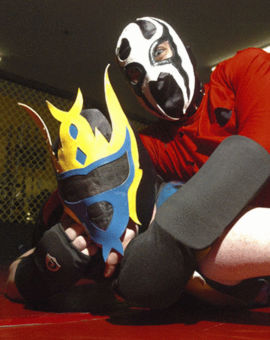 Tonight's top story: in a landmark achievement in diplomacy, two bloggers of hated enemy teams set aside their differences for a night and talk some football. I caught up with Brian Cook from mgoblog and, after donning our traditional Mexican Wrestling outfits, we got down to business. We had some laughs, some tears, and I think I might have been illegally fishhooked. But, alas, my gracious visitor brought along Big Ten refs who turned a blind eye to it.

On a serious note, Brian is just about the best there is at this blogging game, and while I've often bragged at the top of my voice while drunk in many a bar that I wouldn't piss on most Michigan fans if they were on fire, my straight-shooting chat with Brian gave me a moment of cognitive dissonance for my blind and completely irrational hatred.

Anyways, Part One is up at mgo, so after you've leafed it over, here is the thrilling conclusion:

I feel like a big part of this game's result is going to come down to that matchup of Notre Dame's D-Line against Michigan's O-Line.  If the Irish can stop or at least limit Michigan's run game, it will be a huge advantage.  Are you of the same mind, and are there any other matchups that you think are crucial?

The mirror universe matchup of Michigan's defensive line and weird LB/DE hybrid Shawn Crable against the ND passing game.  The first drive of the PSU-ND game I managed to see was the final one of the first half and it was an eerie recreation of ND's first drive versus Michigan last year: the defense sat back and got shredded. I don't think we'll sit back given English's propensity to send the house with gusto, but those blitzes have to get to Quinn, otherwise it'll be more of hurl-it-to-Smarjadjaizakziaka and Brian sad.

After the Vandy game I was giddy, but pressure was far less frequent against Central. We also dialed down the blitzing on a couple of respectable Chippewa drives.

No doubt about it.  I still don't understand why defensive coordinators still drop guys into coverage and challenge Quinn to beat them with short pass and no pressure. When Quinn has all day, he hurts people, steals their girlfriend, and then kicks sand in their face.

So what's the story with Michigan's coaching staff shakeup?  Have you seen a noticeable change in how the games are called, or is it too early to judge? 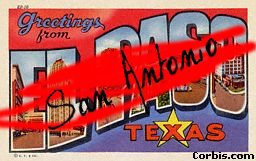 Things appear wholly different on the defense. Last year Michigan was the kind of team to rush three on third and long; this year they're sending six with great consistency. Against spread formations and in passing situations we've been deploying a 3-3-5 with Branch, Woodley, and Jamison/Biggs on the defensive line with Crable functioning as a defensive end. There's been man coverage and stuff -- something we avoided like it was ebola-covered colon cancer a year ago. Everyone is pleased with the early returns.

The offense is different but also the same. We've implemented a much-ballyhooed zone rushing attack a la Minnesota or the Broncos which has crooshed silly pig foes. You might say "wait that's just CMU and Vandy," but Vandy just held Alabama to 3.4 YPC and CMU's defensive line is actually pretty good. I'm not ready to declare it a machine yet, but it is much, much better than last year. Also returning in style: the waggle. It's the perfect counter to the zone game and Michigan tight ends have been open by yards when we run it. So alot of the actual execution has changed.

What hasn't changed is the philosophy: slow and steady wins the Citrus Bowl bid.

Wait a minute, did i just hear you talking up Vandy and Central Michigan? No disrespect to these fine programs, but I think one can safely say that the Irish are heading into this game with the advantage of having tuned up against more meaningful competition. Is this a concern for you?

I do think the rushing results against Vandy and CMU are less than totally meaningless. That's as far as I want to take my praise. I'm actually not sure how much more we know about how ND stacks up against what Michigan is going to try to do on offense. Georgia Tech's running game was reggie ball and some zone reads. Penn State is breaking in four new offensive linemen and has a pretty mediocre RB. Michigan is going to try to pound ND all day. I don't know that we've learned all that much about ND's run defense.

How has your RT been holding up, by the way? He's a true freshman, after all. 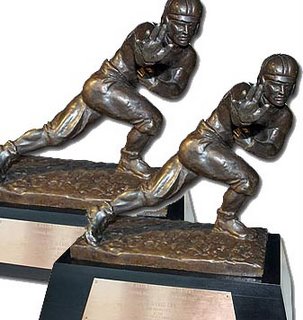 I have been nothing but impressed with Sam Young. He's the first true freshman to ever start on the offensive line in game one, and that's counting all those years with leather helmets and four-point touchdowns. I've been paying pretty close attention to him... he's huge and he does a great job at mauling defenders and taking them out of the play. I have no doubt that he will be an All-American someday. No, scratch that, Heisman trophy winner.  TWO Heisman trophies.  Write that down.

How will he ever get them away from Emu?

They're going to make a new trophy for Jimmy Clausen. The Heisman is too pedestrian. Seriously, though, Sam Young has been very good, and that's good because the Irish were really desperate for somebody to step up at that RT spot.  He still looks like a freshman sometimes and he's still learning the nuances, but when he locks on and drives ahead, it's pancake city, baby.

It'll be interesting to see him versus Woodley/Crable/Biggs/Jamison. I hope he struggles. I do know that going into the year DE looked like a huge weak spot for PSU. No idea about GT... and Young did get pulled in that game for some reason or another. That matchup will be key.

Well we've covered a lot about the big uglies.  I guess we should at least take a gander at the skill position battles.  So, uh, has Steve Breaston learned how to catch yet?  If they gave yardage for getting one hand on a ball, Steve probably would have shattered every NCAA receiving record by now.

He dropped a slant between the numbers in our opener but hasn't made a real gaffe other than that. of course, he hasn't been asked to make any difficult catches. (Not that there have been any to make: Michigan's thrown one pass longer than about 15 yards, a 28-ish yard touchdown to Manningham late against Vandy.) He's been playing like people expect him to at this point: four or five catches, half of them screens, good yardage on those, but not Desmond Howard. I bet you see an end around to him, maybe a reverse, a few screens, and a few throws downfield. Add in kick/punt returns he should have around 15 touches. He's still a threat to do something ridiculous whenever he gets one of those touches but he's not a terror like we thought he'd be.

Michigan's hardly thrown in its first two games so it's hard to judge the WR core.

Especially because DeBord loves him some tight ends.

And who among us can blame him?

So, how hot is Lloyd Carr's seat?  I mean, other than being hunted down and beaten by you personally, is he in any other danger if he puts up another disappointing season? Like possibly an unwanted mandatory promotion?

(did you notice i used the proper number of L's?  See, not all Notre Dame fans are savages.)

Shocking indeed. I've gone on record far too often about this: he's not in any danger. Michigan just doesn't roll like that. It would take something really horrific to bring his job under threat, like a repeat of last year, and even then I don't think he'd get fired. And there are much greater threats to Lloyd Carr's person than me. Like, say, Joey.

Well, that should about wrap it up. I guess somebody has to go through this and correct all of my spelling and punctuation errors.


Well, hopefully that was informative. Brian will be joining me for this week's Friday Night Lites, so we can touch on anything we overlooked here. My general impression from my chat is that this game is going to be won and lost in the trenches by the big, scary men who try to hurt people. You know what you're going to get with the skill players, and there's plenty of TNT on both teams to break it open. The key is which team will be able to dominate the line of scrimmage and give their playmakers an opportunity to scamper around the open pastures of Notre Dame stadium.

Labels: Blogjammin', Can't We All Just Get Along?, Heisman, Let The Hate Flow Through You, Let's Get Naked, Mouth-Breathing Fans of Rival Schools, Snooty Pop Musicians and The Guys Who Love Them